It was time for my first layover destination, and what a way to kick it off with Nice in France. Apparently crew bid for this destination and I’m extremely lucky to get it on my roster! Especially as a ‘supy’ flight. I was SO excited and had lots planned for the layover.

The flight over to Nice was dreamy. The crew and customers were amazing and I felt a lot more confident. I was able to sit in the cockpit again for take off and landing which was so exciting. The landing into Nice was beautiful!

We arrived into Nice at around 1pm. I nearly had a panic attack on the way to the hotel as I couldn’t find my ID cards anywhere as I had took them off during the flight. I had the whole crew opening up their bags and searching for me! Absolutely mortified! Luckily, after about 15 minutes of sheer panic and stress, they turned up, in my crew pyjama bag!!

We arrived at the hotel which was right on the beach. It was stunning and the weather was perfect. Blue skies and warm. It was such a nice feeling to get some fresh, cool air as Dubai is still so humid at the moment.

Lots of the crew were keen to go out and explore, so we agreed to meet downstairs in 45 minutes. Nine of us ended up renting two cars and heading off into the city. We drove to a beautiful viewing point and then had dinner along the sea front at Villefranche-sur-Mer. I had mussels in a white wine creamy sauce with french fries – délicieux! 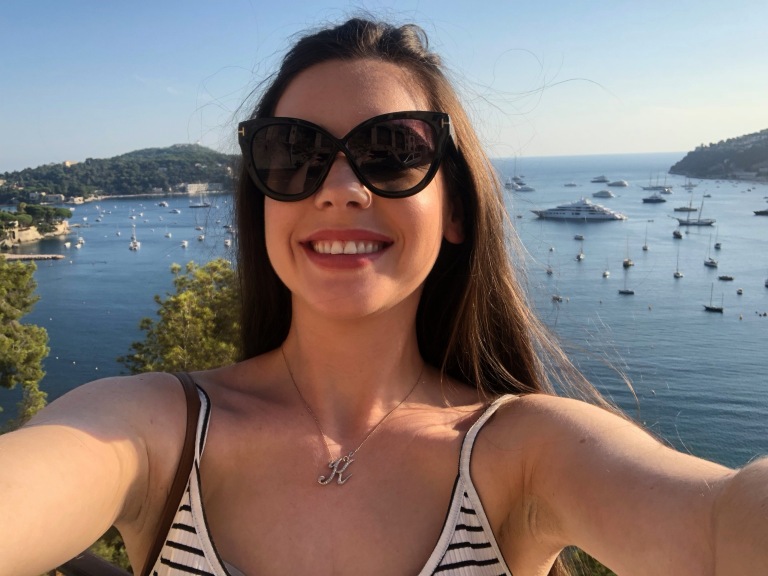 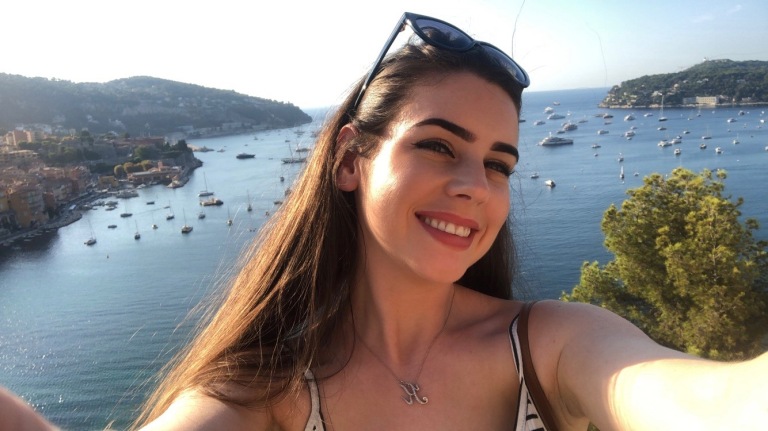 By this time, the sun was setting so we made our way over to Monaco which was a 20 minute drive. I wish we got there earlier so we could have seen it in daylight because it was so beautiful, however, it was stunning at night and everyone had their ball gowns and suits on ready for the casino! 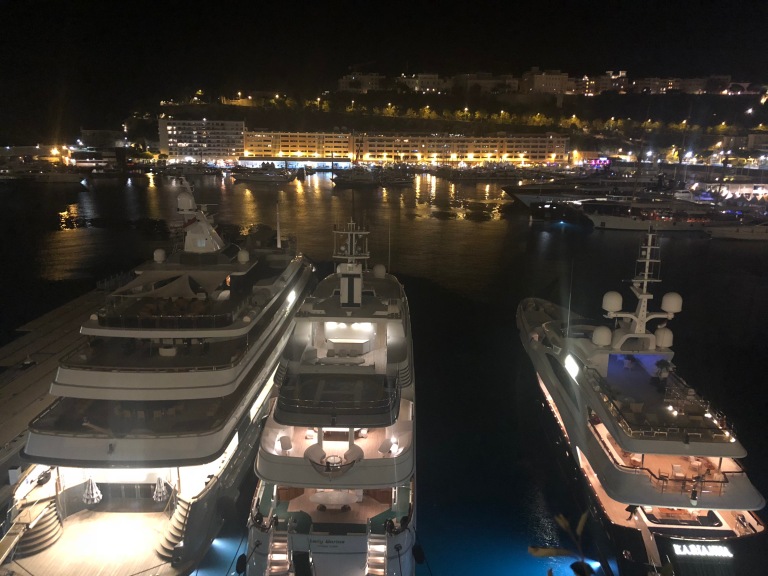 We then made our way back to the hotel to get some much needed rest. I was also finally able to FaceTime family which I haven’t been able to do in Dubai for the past two months as it doesn’t work. It was so lovely catching up!!!

The next morning, I was up early as I wanted to squeeze in a few more things before the pick up in the afternoon. I had breakfast downstairs, in the courtyard looking out onto the beach and then I rented a bike from the concierge for €9 for half a day. I cycled along the beach up to Castle Hill. 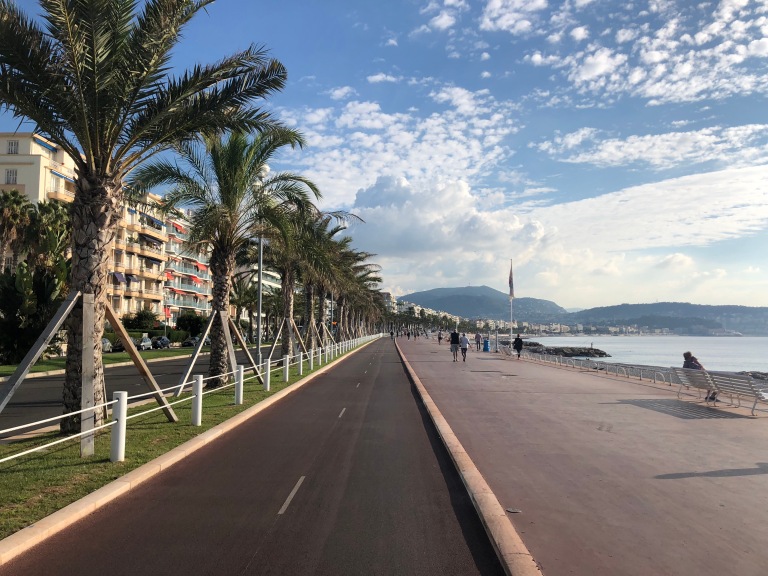 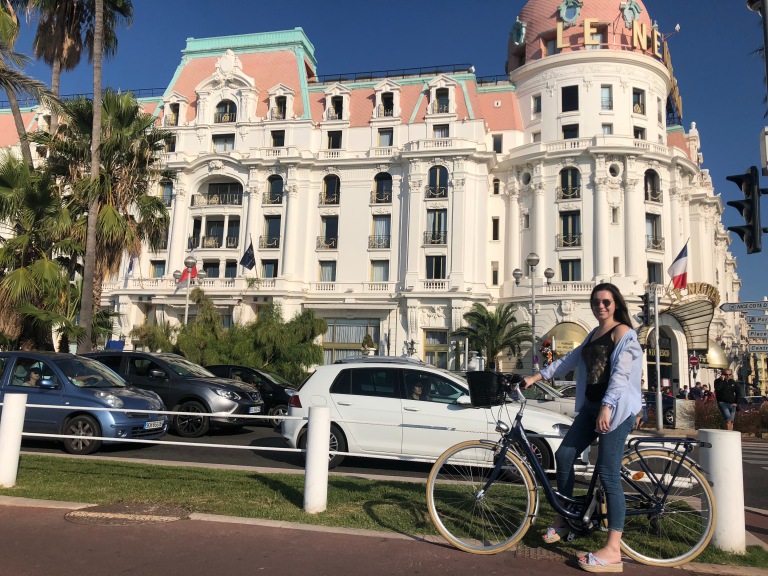 I then made my way up to the Castle which had amazing panoramic views of the city. Originally a citadel used for military purposes, the castle has now been transformed into a park with an incredible viewing point. 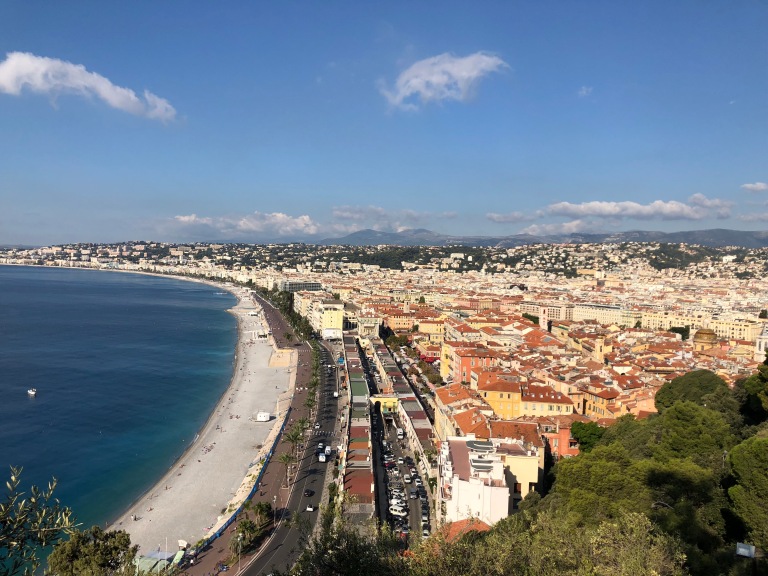 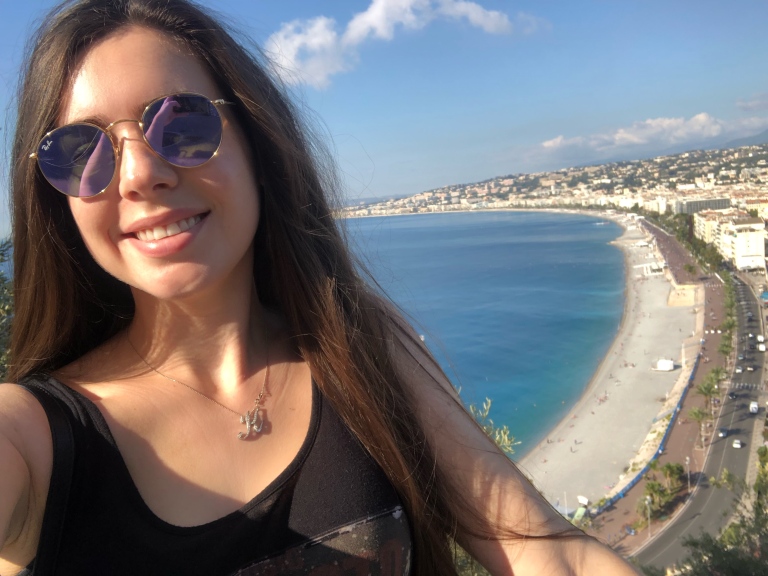 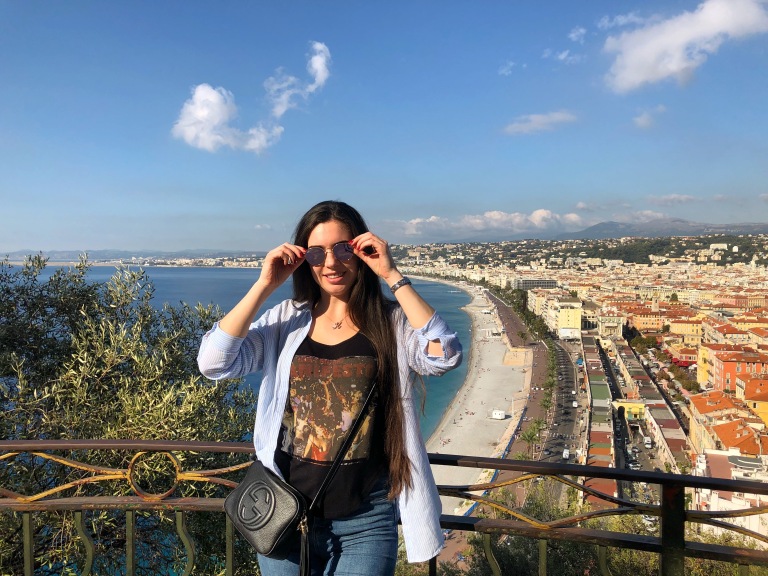 I then took the obligatory photos in front of the Nice sign just at the bottom of the castle and then had a little walk into the town. I stopped off for some macarons in a lovely shop called Angea and then rode back to the hotel just in time for the wake up call. 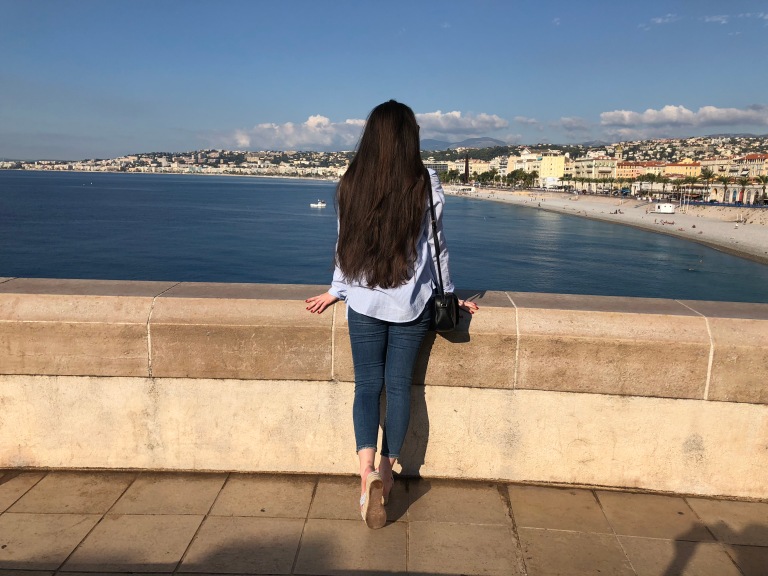 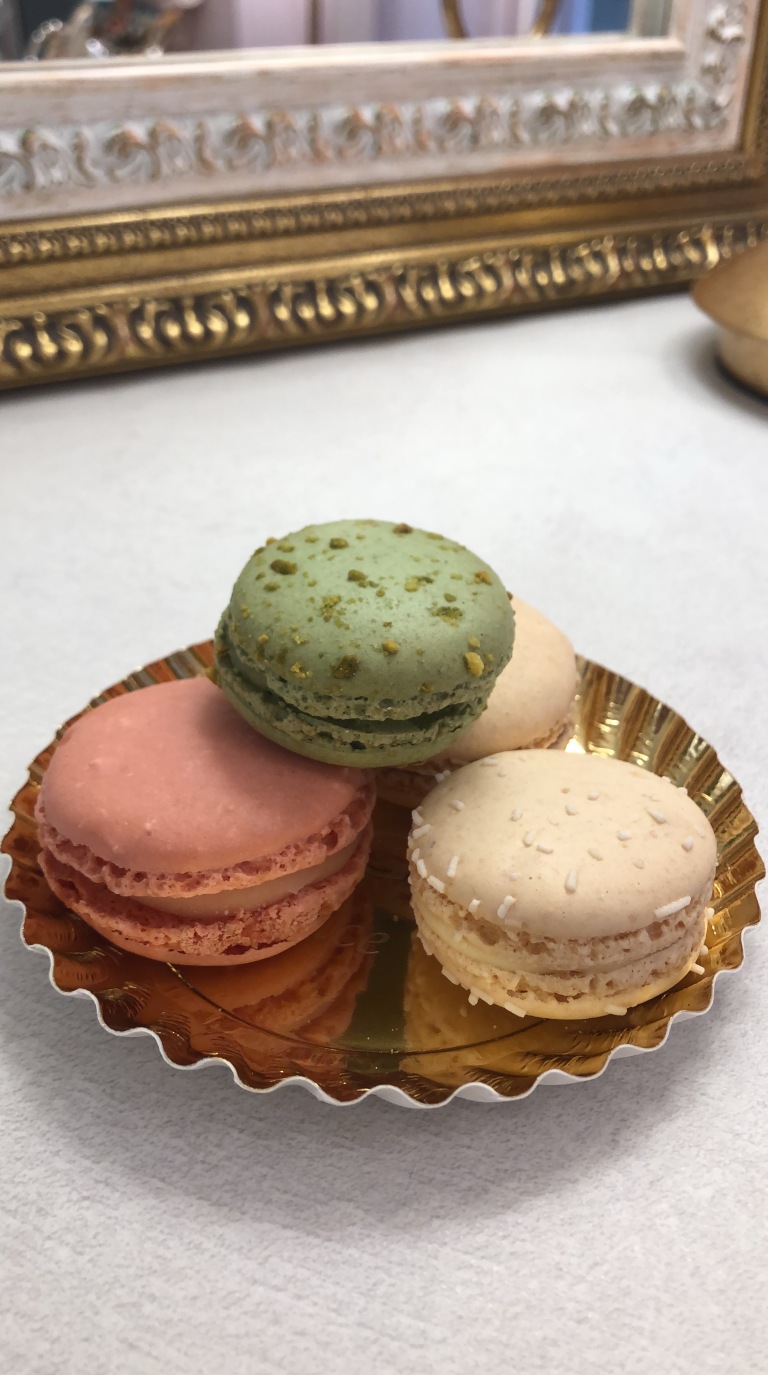 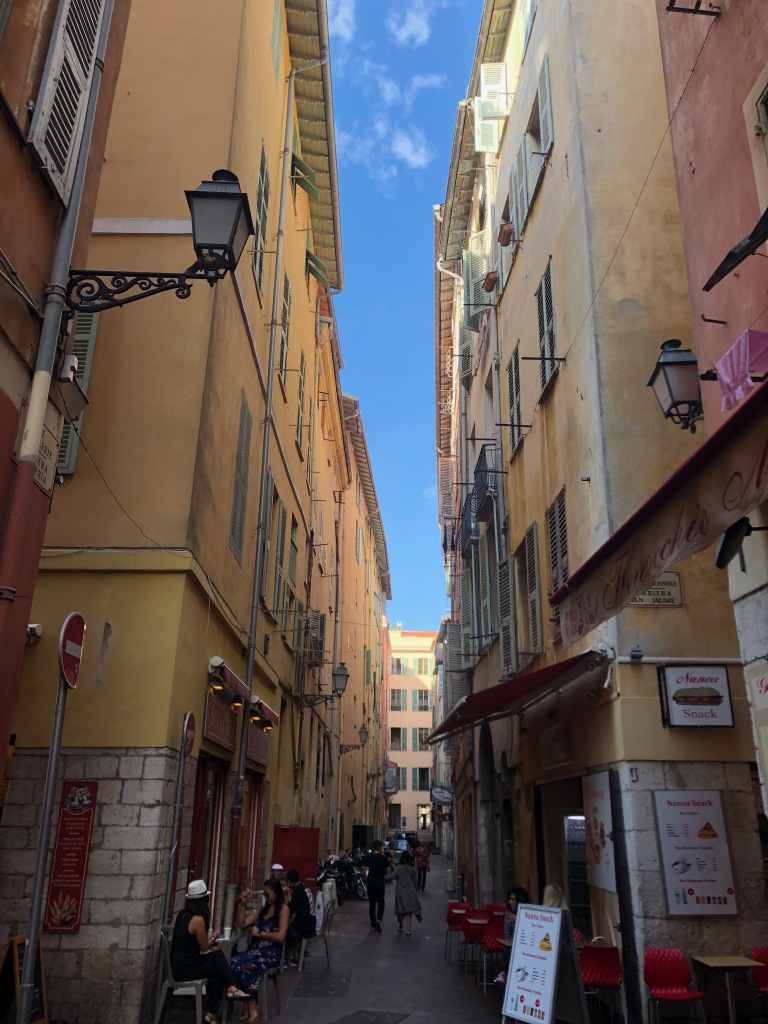 And that wraps up my first ever layover! It was absolutely amazing. I loved every moment of it and I had so much fun exploring Nice and Monaco. I would definitely come back if I am ever lucky enough to get the chance.

With that, I got ready and then made my way back to Dubai. The flight went really well and I am slowly feeling more and more confident. It was the last time sitting in the cockpit for take off and landing so I cherished every moment during the approach into Dubai.

Now for a few days off before my first operational flight to… Hong Kong!